WHAT HAPPENS IF YOU SMOKE MAGIC MUSHROOMS?

Smoking isn’t normally how one would go about consuming magic mushrooms. After all, ingesting shrooms by mouth still makes for the most efficient trip. So why try something new? Is there even a point to smoking shrooms? Let’s look into smoking magic mushrooms and what you can expect from it.

CAN YOU EVEN SMOKE MAGIC MUSHROOMS?

Yes, you can smoke magic mushrooms. Those who do normally mix shroom pieces in with tobacco or cannabis in a joint. As these additional substances have their own effects on the body, they can alter the mushroom experience as well. But the biggest difference from consuming shrooms the “traditional” way has to do with the psychoactive prodrug psilocybin. It just so happens that psilocybin and smoking don’t really go together all too well…

Psilocybin, which is the key chemical precursor to the psychedelic alkaloid psilocin, has a low flash point of 523.4°C. At temperatures above that, psilocybin is destroyed, and thus the shrooms lose their effectiveness. The problem: a joint or pipe will burn at a much higher temperature, easily reaching 800–900°C. The result is that there won’t be much left inside your magic mushrooms when you inhale. This is also the reason why those who smoke shrooms normally ingest them orally at the same time, or use weed or other substances to augment the psychoactive effects.

As it stands, the main disadvantages of adding magic mushrooms to a joint are the reduced potency of the experience and a waste of good shrooms. Then again, the fact that your shrooms will be less strong when you smoke them doesn’t necessarily have to be a negative. If you feel like experimenting a bit, smoking shrooms could be an interesting alternative, although it has its drawbacks.

THE EFFECTS OF SMOKING MAGIC MUSHROOMS

Smoking magic mushrooms is arguably a bit obscure, so collating results on the experience is similarly abstract. Presently, there are no high-quality studies on the topic, so all we have to go by are anecdotal accounts. Since magic mushrooms are almost always bulked up with some sort of smokable material like weed or tobacco, the resulting “trip” tends to err on the effects of the other dominant substance. Cannabis and magic mushrooms are thought to be a good combination when smoked, as many shroomers choose to smoke cannabis when ingesting shrooms anyway. In this way, the effects are more on the psychedelic side, whereas tobacco-laden shroom joints will likely be more alert and euphoric.

WHAT SHOULD YOU WATCH OUT FOR WHEN SMOKING MAGIC MUSHROOMS?

Just like if you were to eat magic mushrooms, inhaling psilocybin has the potential to initiate a psychedelic trip. How mild or intense it ends up being will vary based on numerous factors related to the mushrooms, other substances in the roll-up, and you. As such, the risk of a “bad trip” is just as likely in this scenario as any other. So make sure to mentally and physically prepare your set and setting as you normally would. Bad vibes? You might want to think twice before you go tripping.

Because there is a lot less data, even anecdotally, on what it’s like to smoke magic mushrooms, there is also a lack of information on suggested dosage or other factors. Be cautious as you experiment, and consider recording your findings to evaluate the results later on.

ARE THERE ANY DANGERS WITH SMOKING MAGIC MUSHROOMS?

Setting aside the possibility of an unpleasant trip, it’s not the psychedelic constituents of the shrooms that present danger when smoking them. The risks are associated more with the smoking itself. One issue is that mushroom spores can irritate the lungs and throat when inhaled. When mixed with other substances like tobacco, this irritation can increase, potentially worsening or contributing to issues of the respiratory system.

HOW TO SMOKE MAGIC MUSHROOMS 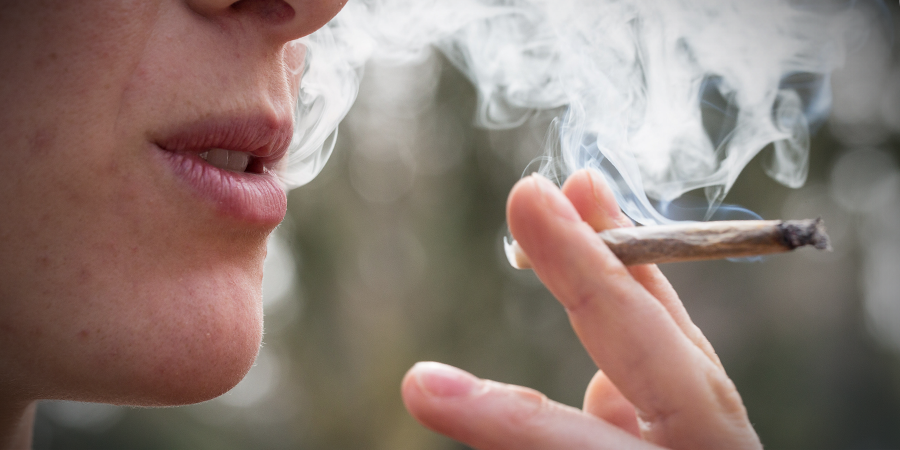 Just grinding up some shrooms and smoking them in a joint won’t work, as your dried shrooms will likely still be too moist to burn well—and that’s not even mentioning the bad taste! Let’s assume instead you’ll be mixing your magic mushrooms with weed, or other, more innocuous herbs like catnip or damiana. For an enhanced effect, some choose to eat shrooms alongside smoking them, but we recommend you exercise extreme caution here. This obviously presents a much greater risk of experiencing a bad trip.

Anonymous Posted on May 6, 2021
A paper published in the journal Scientific Reports documents a study in which 19 patients diagnosed with treatment-resistant major depression were administered psilocybin. [...]

Anonymous Posted on May 6, 2021
CAN MAGIC MUSHROOMS IMPROVE CREATIVITY? The magic of mushrooms may help you think outside the box. In this article, [...]